Bender and the Osaka Aquarium – Japan by Bike Pt. 15

After Kanazawa I made another beeline for Osaka and the pleasures of the city, most notably a shower, heating and a proper bed (capsule). 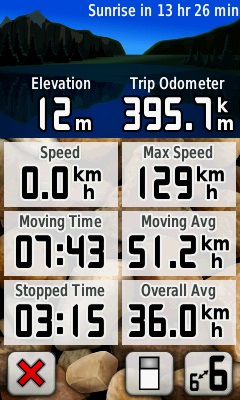 I arrived at the Hostel and proceeded to make friends with an affable American bloke.  He had just arrived in Osaka too and one of the mainstays is the Globe Fish or Blowfish. My exposure to this fish previously was through a Simpsons Episode on the subject.  Our first port of call was the walking street and to find a place to try this poisonous but delicious fish.  We were being cheap and it was a bit of a tourist trap so we just got a platter with slithers of the fish done 3 ways – fried, raw and something else.  The raw was the best, with the fish melting in your mouth.

The night was young and being a Tuesday night there wasn’t much happening.  We decided to take things into our own hands.  The 7/11s being my lifeblood also had extensive alcohol selections in their fridges, often filled with 500ml cans of Euro and Japanese beer (Sapporo being my favourite).  Being young and Australian these 500ml cans excited me, how could Japan being such a conservative country and have 500ml cans but Australia not?  What was this madness, I had to make up for lost time. What ensued was a convenience store crawl with my new friend and I, just walking the tourist strip and trying to find a bar with people in it (to no avail).  At one point we walked into the ‘Pig Hip’ bar, the 2 serving girls almost seem frightened to have customers.  I took my GPS along which provided this handy map of the drunken stumble –

What it looks like from space when drunks stumble.

This stumble also included passing out under a bridge for a few hours when we both decided to sit down for a chat.  We woke at about 3am not knowing where the hell we were and finding all transport had stopped, including Taxis.  Luckily my handy GPS came to the rescue and we were able to walk for 40 minutes or so back to our hostel.  Here’s the one picture I got from the night –

We snuck on to a boat on the river.

The next day was much more subdued, I went to visit the Osaka Aquarium which is famed as the best in Japan.  It certainly did not disappoint. 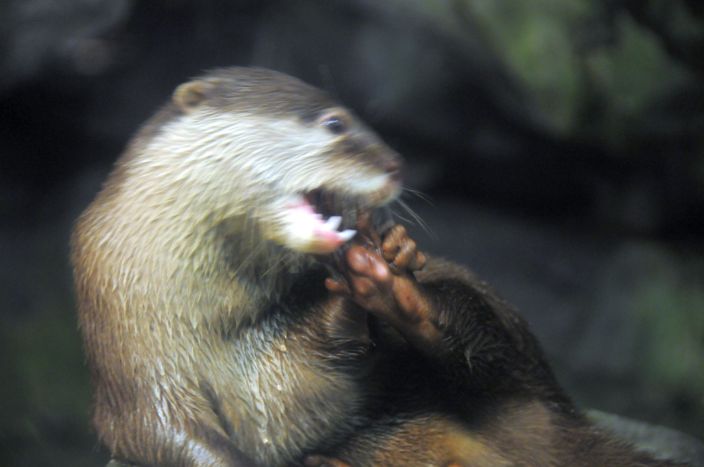 What a mischievous smile. 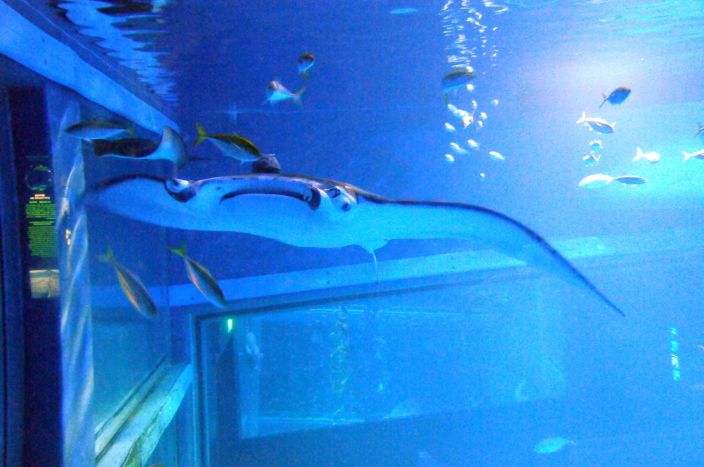 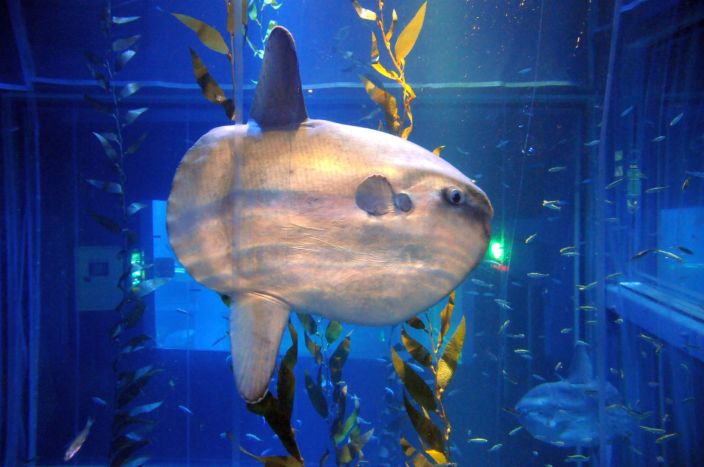 This tank was amazing, 3 Whale Sharks and lots of Manta Rays.

This reminds me of those Deviant Art Wallpapers. 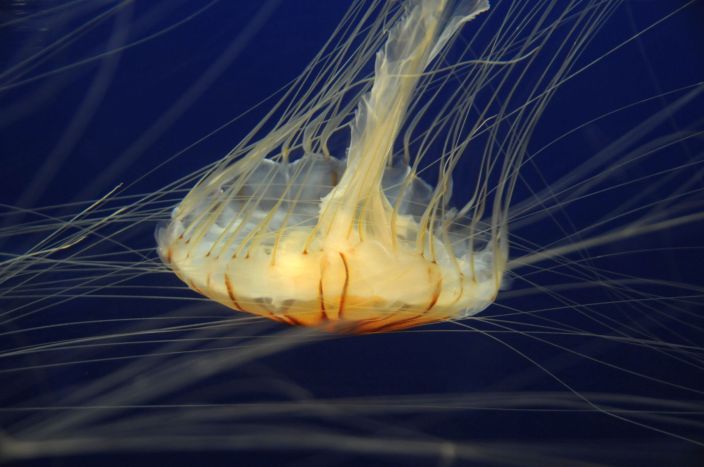 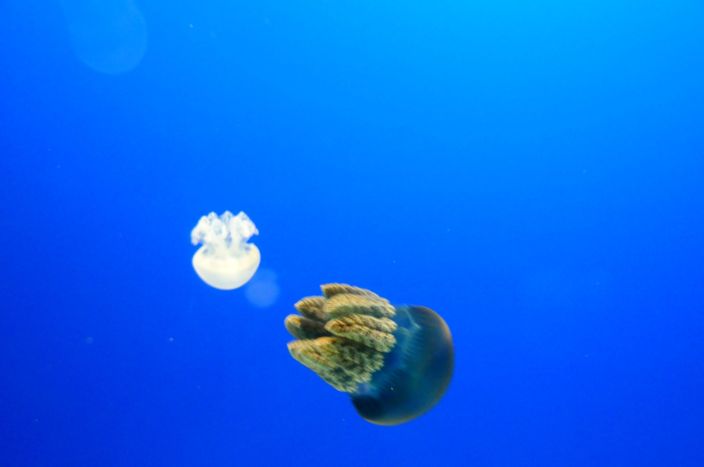 This feels like it’s in space for some reason.

The aquarium was filled with beautiful creatures and amazing displays but I felt like I was missing something, it hadn’t quite reached the heights that I had hoped for.  I trudged outside mulling this over, despondent and depressed.  Something shined in the corner of my eye and lo and behold, the beauty of Neon had beamed out to me.  The missing ingredient was Neon Lights!

You almost got me Japan, thinking of doing a display without Neon, that is blasphemous. 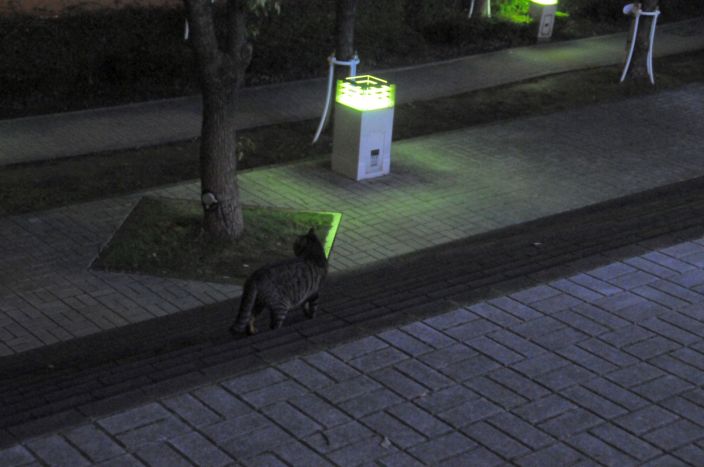 ..and finally a hopeful cat hanging around the Aquarium. 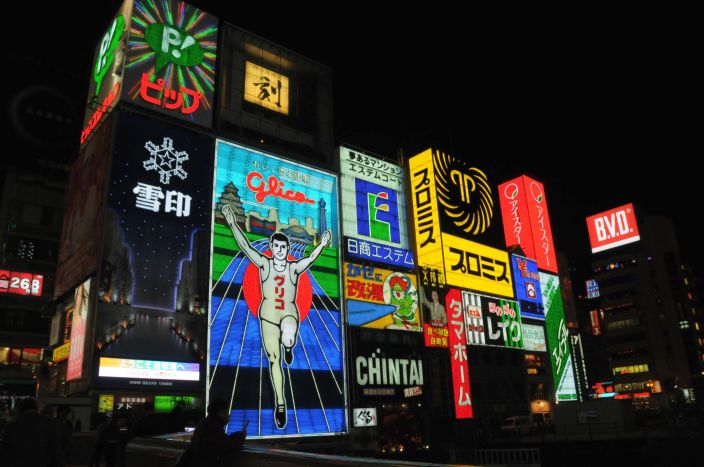 From here I was going to head to the famous Deer Park in Nara via the mountains.

6 thoughts on “Bender and the Osaka Aquarium – Japan by Bike Pt. 15”